This is Mary.  Mary and I share a birthday.  April 16th, 2012 marked my 32nd birthday and Mary’s 80th birthday.  I am not sure what Mary had planned for her 80th birthday, but I  mine was spent at the vet’s office and then out for some Mexican food.

So, Mary’s family decided to surprise her for her big milestone year by throwing her a party.  Without her knowing about it.

And these four men.  These are her sons, two of which live across the country.  All four were in attendance for the big reveal.

The party was last Saturday…  Remember that one?  The rainy one.  Apparently, it can be a little challenging getting someone to get out of a car for no reason, in the pouring rain.  Somehow, they got her out of the car and into the clubhouse (aka Party Central.) 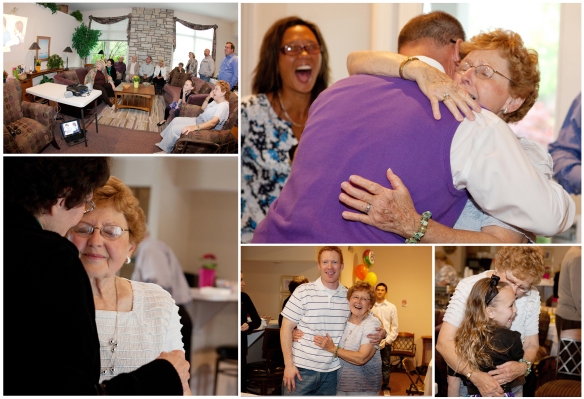 Mary had an amazing turnout.  I met her, her family and her friends for the first time that evening and I can vouch for her.  She has some wonderfully welcoming and hilarious family and friends.